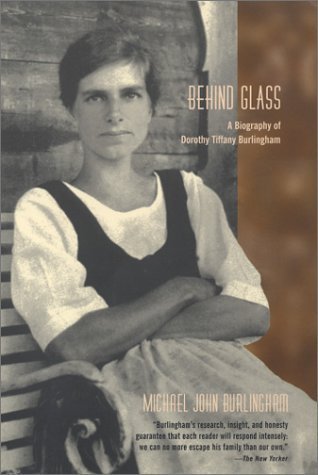 To order a signed copy, please contact the author

The Last Tiffany: a Biography of Dorothy Tiffany Burlingham

Reissued in paperback under the title
Behind Glass

“Burlingham’s research, insight, and honesty guarantee that each reader will respond intensely: we can no more escape his family than our own.”

“A drama set in a remarkable time in which New York City matured into an international metropolis, Sigmund Freud revolutionized Western thought and Hitler rose and was crushed….This biography is rich in personal and historical detail

“This splendid biography is two books (at least) in one….Toward understanding Dorothy Burlingham, Michael Burlingham (her grandson) gives a richly detailed account not only of her Tiffany forebears but of the distinguished Burlingham family she married into.”

"Michael Burlingham. gives his readers more than just a history of his famous grandmother’s life. Rather, he has written a biography of the dream of dynasty….In a measured, evocative style, Burlingham’s biography transcends its immediate subject. The story it tells is one of both the tragedies and regenerative powers of the family.”

“[Burlingham’s book] is one of the best biographies in the whole history of psychoanalysis…[and] an immensely moving human document….One comes away from the book as from a good novel, with a deeper understanding of the complexities of human motives and of how even the most brilliant people can retain the full capacity for self-deception.”

“This is a fascinating and disturbing story of a woman who dedicated her life to psychoanalysis-and lost most of her family in the process….Spanning four generations of Tiffanys, it has the broad sweep of a Russian epic, with the poignant and tragic aspects of a gothic novel.”

—Journal of the American Psychoanalytic Association
"I am very much impressed by [The Last Tiffany]; not just by the great body of research that went into it, but by the excellence of the writing, and by the thoughtfulness and the penetration into the subject matter by which every page is impregnated....You have, in this book, risen—as no one else has, above the great welter of contradictions and conflicts that have so distorted (often tragically) the lives of the earlier generations—their talents, their emotional trauma, their congenital weaknesses; and, in doing so, you have brought to all of them a species of understanding, and indeed of expiation, they were never able to find for themselves."
—George F. Kennan to Michael J. Burlingham, May 13, 1989

The Last Tiffany: a Biography of Dorothy Tiffany Burlingham
“A warts-and-more-warts account of early life among the shrinks.”
-William Putnam (Bill) Bundy